A Night at the Zoo 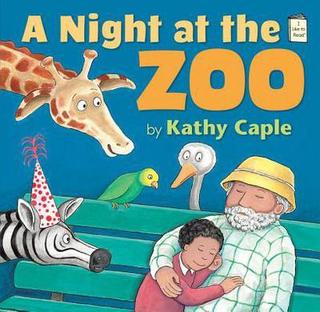 "One boy, one dad, one cellphone and one ill-timed nap add up to one crazy trip to the zoo. Ever wonder what happens after hours at the zoo? When Mom calls Pop and Sam at the end of their zoo outing, they decide to eat one last container of popcorn on the bench. The popcorn has a soporific effect, and both father and son fall into a deep sleep, missing the closing announcement. The animals parade out, wearing party hats of all sorts, and are drawn to the cellphone resting next to Pop. Once the monkey gets his hands on it, he starts taking pictures. The night guard discovers the napping father and son, the animals are startled, and the phone is temporarily lost. Telling a story with very limited vocabulary, short sentences and one-, two- and three-syllable words is a challenge, but Caple's amusing, full-color ink-and-watercolor illustrations of animals gone wild extend the simple text and deepen the story. Very new readers will find success here, and adults will chuckle along with the silly situations shown in the pictures. Teachers can use this to jump-start youngsters' imaginations—what might happen after dark in other common places? Young animal lovers will find much to laugh at here. (Early reader. 3-6)"

"... a whirl of chaotic, onomatopoeic action."

"... the presence of the cell phone, a constant part of many kids’ experiences, will delight children. The text is easy enough for emerging readers to tackle on their own, and the sound effects that the bold type invites will have even the youngest child joining in to ring, bop, snap, and yip."

"This “I Like to Read” series book is perfect for the newest readers, with a simple story told using controlled vocabulary in a large, easy-to-read font."

"... will entertain those just starting down the path of reading.
Ages 4 to 7."

"A Night at the Zoo," is an "I Like to Read" picture book published by Holiday House. It is a story for early readers told in very few words and lots of pictures!

A Night at the Zoo

During a visit to the zoo, Pop and Sam grow tired but while they are napping not only does the zoo close for the day but the animals come out to play -- with Pop's cell phone.

Blanche and Otis are sheep who enjoy each other's friendship from autumn through spring.

Duck and Rat's bookstore is busy as Christmas approaches and everyone buys gifts and celebrates.

There's a lot more to this Worm than meets the eye, in these four tiny episodes.

This is no ordinary Worm! His limitations never stop him.

Four little stories about Termite and his pal Ostrich.

Whether writing, measuring, tap-dancing, or canoeing, favorite character Termite finds new ways to get into trouble!

Worm Gets a Job

Worm tries to earn money in order to buy a paint set that will help him enter an art contest.

Hillary to the Rescue

On the wintry day when her drama club has a mishap on the way to see a play in the city, Hillary is glad she has bundled up her warmest snow gear.

Hillary lets her true self shine in an audition.

After spending her money on a purse, Katie is now faced with the problem of getting some money to put into it.

Arnold and his sister Rose give two bullying classmates a taste of their own medicine when Arnold decides he doesn't have to be a wimp anymore.

The Coolest Place in Town
When Hank and Zoey's sister Dory kick them out of their wading pool on a hot summer day, two boys find a way to get even.
The Biggest Nose
Having the biggest nose school is no joke, especially when everyone wants to measure it.

About the Book
A busy day at the zoo leaves Pop and Sam tuckered out on a bench. As they nap through closing time, the animals come out to play. When Pop's cell phone captures Monkey's interest, he snaps a few pictures with it before dropping it on Giraffe's head. So begins a hilarious chain of events that gets the whole zoo howling, awakens Pop and Sam, and alerts a guard. As Pop and Sam are escorted out, they watch in wonder as Parrot drops the phone into Sam's hands. But the real surprise comes when the phone's photos reveal the monkey business that was afoot while they slept!